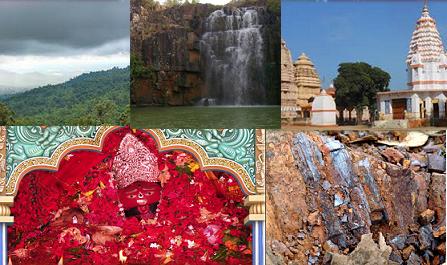 Legend Associated with the Temple

There are several legends associated with the temple of Goddess Tarini. It is believed that once the king of Kendujhar Shree Govinda Bhanja Deo worshipped Goddess Tarini to go to his province and Goddess was very much pleased with his worship and she then agreed to go to Kendujhar. But she kept a term that while on the journey the king would not turn back  and look. But the king couldn’t keep the term and turned once at a point and hence the Goddess stayed then and there in the form of a stone idol. That was the holy village of Ghatagaon where the king then built up a huge temple and where still Maa Tarini is being worshiped by devotees at the shrine.

Temple of Lord Vishnu in Kendujhar

The temple of Lord Vishnu at Kendujhar is one of the finest built structures that depict the perfection of the Odiya architecture and its forms. As per the Hindu mythology Lord Vishnu is said to be the sustainer of this entire world and he takes incarnation in various forms in various Yugas to protect the Dharma and safeguard the devotees of his. Lord Vishnu is also believed to be the supreme god of the Hindu Religion.

In the shrine of the Vishnu Temple at Kendujhar one can easily find all the incarnated forms of Lord Vishnu with the descriptions encrypted on the walls and the inner roof of the structure. Devotees and Pilgrims across the country visit this holy temple of Lord Vishnu every year and worship their god and take blessings. Several festivals also take place at the city of Kendujhar and specially at the temple of Lord Vishnu. The temple of Lord Vishnu has become of the pilgrimage and hence witness thousands of visitors and devotees from all over the state and country as well. All the rituals performed on daily basis are almost same as of the Lord Jagannath temple in Puri, as Lord Jagannath is said to be one of the incarnated form of Lord Vishnu. The Lord Vishnu temple at Kendujhar is also one of the symbol of the magnificent history of the state of Odisha and reflects the art work and architectural excellence as well.

The entire forest area is full of these rich flora and fauna. The varieties of wildlife animals found in the sanctuary include various indigenous and endangered species. The Sanctuary is rich in deciduous afforest and is also a home to several species of animals and birds like the pangolin, jungle cat, leopard, hyena, fishing cat, pangolin, Indian langur, elephant and tiger along with numerous species of birds and reptiles are also some of the famous fauna that are found in the Hadagarh Wildlife Sanctuary.

The forests are scenic and turn out to be great adventurous spot during rainy and autumn seasons. The tranquil environment at the Sanctuary attracts thousands of nature lover those who visit this scenic beauty place and take the pleasure of being close to the Mother Nature and spend some quality time here. This is one of the must visit places of Kendujhar.

Gonasika is one of the most famous tourist spots of Kendujhar known for the forested mountains and the emerald valleys. The trip to the city of Kendujhar and from the main city of Kendujhar to the holistic destination of Gonasika the famous temple of Brahmeswara Mahaadev can be visited which is at the entrance to the village of Gonasika. The temple of Brahmeswara Mahaadev is situated on the banks of the river Baitarini and is believed to one of the holy shrines in the entire state of Odisha. The village of Gonasika is a screen location which attracts several nature lovers and they visit in groups every year and enjoy the beauty and peacefulness of nature at Gonasika.

Waterfalls at Sana Ghagara near Kendujhar

Sana Ghagara is a place located at a distance of just 11kms and is famous for the mesmerizing waterfalls. Along with the waterfalls the place is also known for the holy shrines of Lord Vishnu and Lord Jagannath. Almost 30 ft in height the Waterfalls of Sana Ghagara are some of the best and most visited waterfalls of Odisha. It is now one of the favorite picnic spot for the residents of Kendujhar and nearby places.

The Waterfalls at Sana Ghagara are being crafted by the nature in such a manner that one can easily observe the complete waterfall from the fool of the fall. And not just that one can also take bath in the natural and pure mineral water of the San Ghaghra waterfalls. The pond or the tanks at the foot of the falls isn’t that deep and big and hence it is safe for swimming and aqua activities like bathing and under water swimming etc. There is also a park located near the waterfall and is also very much natural and being well maintained by the local authorities. The nearby areas of the waterfalls are also very pleasing and the small stones and tiny hills near the location add much more beauty to the entire location of Sana Ghagara. The Waterfalls at Sana Ghagara are one of the most visited and loved tourist spots of Kendujhar.

Waterfalls at Khandadhar near Kendujhar

The waterfall at Khandadhar is located at a distance of 17km from the main city of Kendujhar and is one of the famous tourist destinations of Odisha. The waterfall is said to be 12th highest waterfall of the country. It is about 500ft high and is in a shape of a horse’s tail.

The holy shrine of Lord Gopinath is located at a distance of 9km from the city of Kendujhar at a place called Remuna. The famous temple of Lord Gopinath is also known as the Khirachora Gopinath temple as the main deity of the temple is believed to have stolen the Khiri, a special sweet dish made of milk and rice and hence has got the name Khira Chora Gopinath.

The place where it is located is also known for its historical importance. Remuna is the village where the shrine is located and the name Remuna is derived from the “Ramaniya” which is a Sanskrit word meaning wonderful. The temple is a huge structure and its interiors are crafted magnificently on the stones. The idols of 'Shree Gobinda, Madan Mohan, Shree Chaitanya Mahaprabhu and Lord Jagannath are also located on the various small temple structure inside the main temple premises. The idol of Lord Gopinath is built of black stone and is one of the beautiful structures ever made of any God on stones in the state of Odisha.

The idols of Madan Mohan and Gobinda are brought here by a very dedicated devotee named Chaitanyaa Das Babaji whoc got these idols from the Brindaban in the year 1983, which are still worshipped here with all rituals and traditions. The Prasad offered to the deity of the shrine of Gopinath temple is the Kheeri which is the sweet rice made by mixing up the rice and the milk with sugar in it. The temple premise is very peaceful with the presence of trees and the greenery all over. The trees of Kadamba and Chandana wood are also there in the temple area which spread a beautiful fragrance in the atmosphere and pleases the devotees visiting the temple.

The temple of Lord Shiva located at the village near Kendujhar known as Jhadeshwar on the banks of the river Baitarini. The temple is a revered one among the devotees of Lord Shiva. The temple celebrates several festivals and the most famous festival being celebrated at the Jhadeshwar Temple is the Baruni Jatra which is organized in the month of March and devotees from all over the state visit this place during this festival.