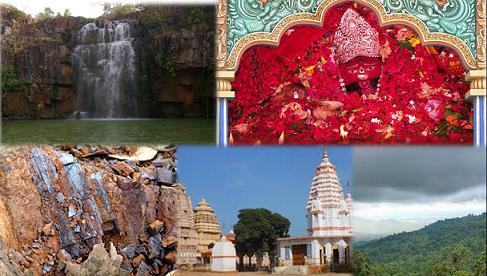 During his rule, Kendujhar was extended from Sukinda in south till Singbhum in north. In 18th century the two towns of Jujhpada and Tillo were added in the areas of Kendujhar under the rulings of King Prataap Balabhadra Bhanjaa. Later these were also granted by the Britishers and were formally added in Kendujhar during the early 19th century under the rulings of King Janardhan Bhanjaa. This was the major and the final change being made in the areas and map of Kendujhar and post this there were no changes being made except that the Jujhpada was then transferred to Cuttack district and the Tillo was being made a part of the Baleshwar district.

Geography and Climate of Kendujhar

The district of Kendujhar is spread over an area of 8236 sq k and is located at the northern most part of the state of Odisha. It is on the border of Odisha and is connected to the state of Jharkhand. Kendujhar is located at an altitude between85°11' East and 86°22'East longitude and 21°1'North and 22°10'North latitudes. The city of Kendujhar is located at an elevation of 477 meters. One of the famous rivers of Odisha, Baitarini originates from Kendujhar. Almost half of the entire district area is covered of forests and hill ranges. One of the hills named Gonasika Hills is said to be the origin of the Baitarni River that flows into the entire district and touches the district of Singhbhum of Jahrkhand state. The highlands which are filled with the clusters of the rocky crags are one of the relieving factor for the tribal inhabitants durin the time of troubles and natural calamities.

The climate of the entire district of Kendujhar is mostly humid all around the year. The season of summer commences from the month of March and the temperature reaches its peak. The maximum temperature of Kendujhar recorded is 39.1 °C. The weather gets cool with the arrival of Monsoon in the month of June-July. Kendujhar being far from the sea coast receives average rainfall and the average rainfall recorded here is 1527.3 mms. The season of winter approaches Keonjhar in early December and the temperature remain comparatively cooler. The minimum temperature recorded in the winters is 11.3 °C and the lowest it reaches to 7°C.

Odisha is the state of which the economy is based on agriculture. Keonjhar is no where separate from it. Due to enough of the rain the district of Kendujhar finds its economy strength by h agriculture industry. More than 82% of the rural population of Keonjhar is involved in agricultural activities. The most common agriculture and forest activity that backs the economy of the city is the established agriculture, assortment of timber and non-timber forest produce, selling firewood in order to be used as fuel and many such activities. Because of the large presence of the natural resources that are available in plethora in the entire district of Keonjhar more than 72 mines are functioning in the district and which offers more than 8% of the workforce to earn their livelihood and also contributes in the growth of the Economy and industries of Keonjhar. Click here for more information on business and economy of Kendujhar

Art and Culture of Keonjhar

The entire district of Kendujhar is said to one of the richest district in terms of the culture and art. The art paintings of the Sitabinj village near Keonjhar city is well known in entire country for its special form. These paintings are done on the ceiling of a giant rock or boulder which is known as Ravanchhaya. This is the art form that demonstrates the pageant of royal or any princely luminary moving on elephants and surrounded with soldiers, ministers and other royal people. These paintings portray the historical events of wars.

Most of these paintings have faded by now but the remaining are more than enough to display the creative excellence and art. Even now one can easily figure out the creativity and expertise being used in form of the parts of the paintings left which shows the heavy and bulky giant elephant which looks like marching, the horses that are chasing and running all over. The tribes of Kendujhar are also known for the folk music and dances. Many of these tribes have their ‘Akharas’ where the men gather and perform the dances on the tunes of the tribal music. Some of the most famous dance forms of these tribes are the Changu dances, Chhau dance, Ho dance and the Juang dance.

Almost all of the famous Hindu festivals are celebrated in the entire district of Kendujhar with immense pleasure and enthusiasm. But due to the presence of the tribal communities several festivals which are only celebrated in the district of Kendujhar are the festival of Sarhul- which is believed to be a festival of flower, Baruni Yatra – the journey of goddess Baruni, Ratha yatra of Lord Jagannath, Karmapuja- a festival of Adivasis residing in Keonjhar, Sohrai and many such other tribal and non-tribal festivals are celebrated the year round.

Click here for more information on art and culture of Kendujhar

Being one of the princely provinces of the early times Kendujhar secures several historical locations and monuments of which are few present with their ruins. Among some of the famous tourist destination in Kendujhar one can visit the Lord Jagannath Temple famous for its terrace, the mesmerizing Ghaghra falls, and the world famous shrine of Goddess Tarini at Ghatagaon and also the Panchabati, are some of the few famous tourist destinations in Kendujhar.

Odisha is a state where people mostly prefer having rice in the meals, hence the city of Keonjhar is now way different and the most loved dish is the Pakhala Bhaat (the rice deeped in water) along with the fish fry, Alu Potal saga, Bhaja, Baigana tarkari. Several dishes made of chicken, mansa tarkari, raga mansa bhaja etc. In sweet dishes the most loved one is the Kheeri also known as paayes, along with thechena podo, Rasgulla, chena mitha etc. Click here for more information on food in Kendujhar

Comments / Discussion Board - About Kendujhar